Tax Tips: If you are leaving Canada

Home » Insights » Tax Tips: If you are leaving Canada 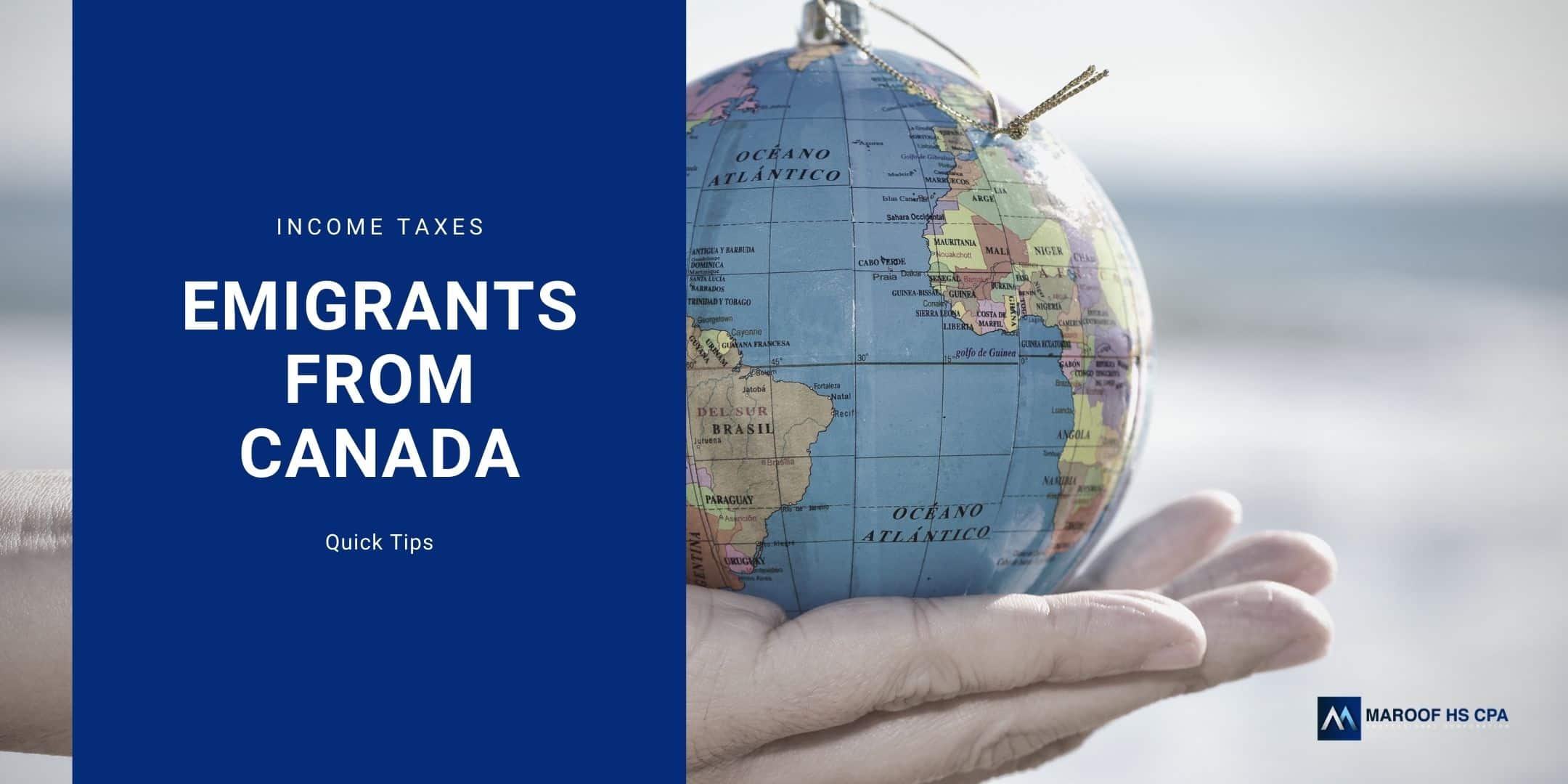 If you have been a resident of Canada and decide to leave Canada, you must review your assets, income, and income tax obligations. Leaving Canada is often referred to as “Emigration”.

The year in which an individual leaves Canada and changes his residency status to Non-Resident is split into two parts: one is part of the year when he was resident of Canada and another one is when he is considered non-resident for tax purposes in Canada. Such an individual is often referred to as a part-year resident.

Often an individual who leaves Canada faces the question of determining one’s residency status for income tax purposes and associated income tax issues. This is important to keep in mind always that income tax residency status is not the same as immigration residency status. A very common issue for leavers which causes income tax complications is unintentionally failing to sever the residential ties with Canada and they are not aware of the fact that their actions and circumstances actually make them factual residents of Canada instead of getting a non-resident status. Departure tax, withholding tax issues, foreign tax credits, and tax treaties between Canada and their new host country are some of the other issues.

Change of residency status affects both current and future personal taxes of an individual in Canada. In this post, we are going to look at different tax tips from a general perspective. Residency determination for income tax purposes in Canada depends on specific facts of an individual’s circumstances. You are always recommended to consult a professional tax consultant familiar with Non-Resident tax matters.

Determine your date of change of residency status in Canada

Determine the date of change of residency status in Canada. This will be the date when you become a Non-Resident of Canada and serves as an important cut-off point to split the year into resident and non-resident status. This is also known as the Date of departure from Canada and is mentioned on the personal income tax return.

A typical example is someone moving to the U.S. from Canada and spending two or three years there. While doing so she keeps on filing U.S. taxes as a resident alien and Canadian taxes as a resident. In such a case, the date when the taxpayer became a U.S. tax resident is the date of emigration for Canadian tax purposes. This is the date when her resident or factual resident status in Canada changes to deemed non-resident or non-resident.

Departure tax is an important area of income tax applicable to emigrants or leavers from Canada and professional tax advice is recommended due to the specific situation of each taxpayer. Often leavers from Canada mistakenly consider the assets for departure tax purposes which are clear exceptions; especially real property, capital property, and inventory owned by a business that has a permanent establishment in Canada, TFSAs, RRSPs, Life insurance policies, or the special cases of short-term residents.

The exercise of stock options in relation to Canadian employment is a complex issue faced by the leavers from Canada. A Non-Resident (leaver) who exercises a stock option must file a Personal income tax return (T1) in Canada for the year in which the stock option is exercised and report the resulting security option benefit.

Canada’s tax treaties with other countries generally give Canada the right to tax the rental income of non-residents. If you are a leaver or a non-resident generating rental income from real property in Canada, you should pay very close attention to this.

This is not always the desired tax outcome! There is a better alternative to getting taxed at 25% on gross rental income – elect to file a personal income tax return and report rental income on it. You will be taxed at net rental income at marginal tax rates. Read here.

Bank and Investment Accounts after you leave Canada

RRSP Contributions for leavers from Canada

Utilize your RRSP Contribution limit for the year in which you depart Canada. Inform your bank or any other financial institution which manages your RRSP accounts that your tax residency status has been changed. You can leave your RRSP account as it is. You should check tax laws in your host country since RRSP may have a complication for your personal taxes there.

Homebuyers’ plan or Lifelong learning loans should be paid back within 60 days of the date of departure, otherwise, these may become income in the year of departure.

TFSA Accounts for leavers from Canada

When you leave Canada, you can make contributions to TFSA before the date of departure. Your savings can still keep on growing tax-free in your TFSAs. You cannot make any contribution or accrue any room after you become a Non-Resident of Canada. You should check the laws of the new host country when you withdraw from your savings account.

RESP Contributions for leavers from Canada

If you have shares of a small corporation in Canada

When you become a non-resident of Canada, your corporation may lose its CCPC status if it was controlled by you. The effects of emigration on your Canadian-Controlled-Private-Corporation (CCPC) can be found here. Further, you will also lose the ability to claim ABIL and Lifetime Capital Gain Exemption.

If you are a Canadian resident leaving Canada, you are recommended to consult a professional tax accountant or lawyer to discuss your specific tax situation. Maroof HS CPA Professional Corporation provides personal tax services in Canada for both residents and non-residents.

Canada is going the extra mile to support the Ukrainians affected by the Russian Invasion. With every passing day number

A lot of taxpayers emigrate from Canada every year, some to the south of the border and others beyond. In

How to calculate foreign accrual property income for a Canadian corporation.

Do You Have A Tax Question?

If you are looking for specific tax advice, start the process now!.

Do you have a Tax Question

We are here to help!

If you are looking to hire our services, you can start the process here.